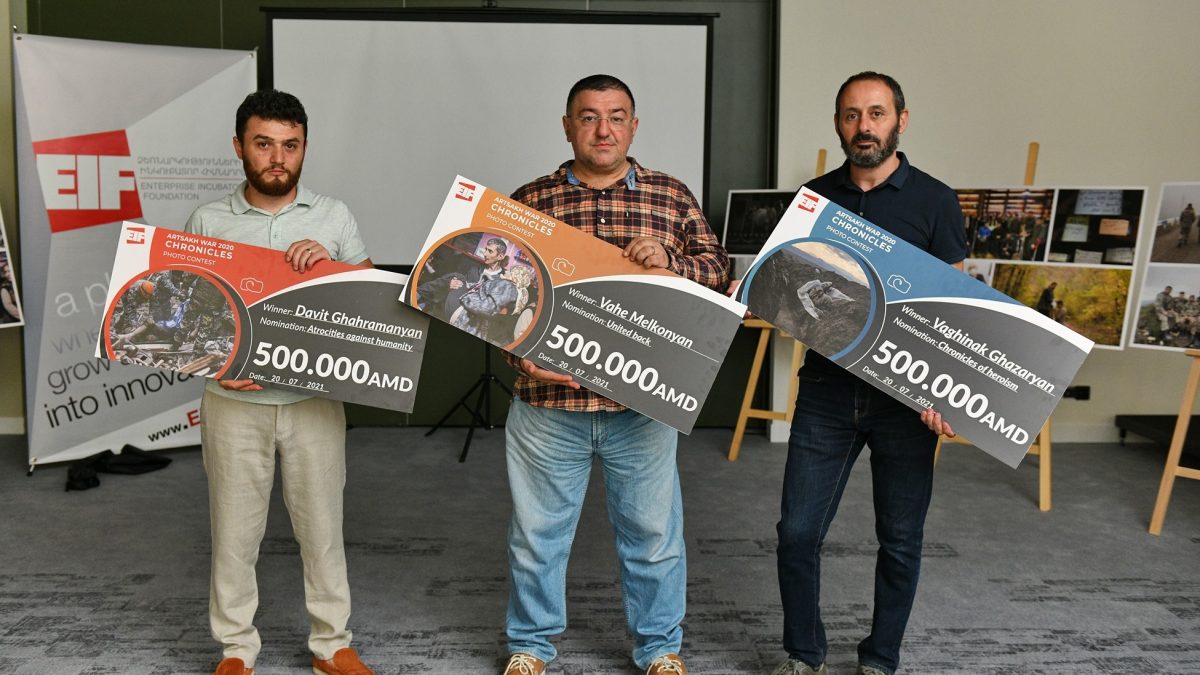 The 2020 Artsakh War has left a mark on all of us. To keep the memory of it accurate and honor those who defended the homeland, the Enterprise Incubator Foundation implements a range of initiatives.

The latest such initiative is the photo contest featuring the pictures made during the war – Artsakh War 2020 Chronicles, with a solid AMD 1.5M prize fund.

At the end of July, EIF wrapped up the competition and awarded the winners. The professional jury had a lot to choose from –  over 80 photos were submitted for consideration. According to EIF director Bagrat Yengibaryan, the contest served a double mission: preserve the historical truth and pass it down the generations for restoration of justice.

The winner of Atrocities Against Humanity category is David Ghahramanyan with his “Rescuers and the dead grandmother”. David is from Artsakh. The photo he made in Stepanakert on November 6 depicts the rescuers who spent over 4 hours looking for the bodies of two young men and their grandmother, killed in their house by an Azerbaijani bomb.

“It was at the dawn. We learned that a house had been bombed. Two of the three victims were young soldiers who had come home from combat posts to rest a bit. People often tell me I took good photos during the war, but I wish I never had to make them,” said David.

The Chronicles of Heroism category has awarded the winning title to Vaghinak Ghazaryan for his “Resting soldier”. Depicting a soldier fast asleep in a trench, the photo tells a simple and powerful story: during wartime, we get closer to our land, and so the soldier fights in the trench and sleeps and dies in the land he is trying to defend. The back of the soldier, whose photo Vaghinak took, merges with the surrounding mountainous terrain, blending him into the landscape. The trench is now his home – a house without a roof or walls. 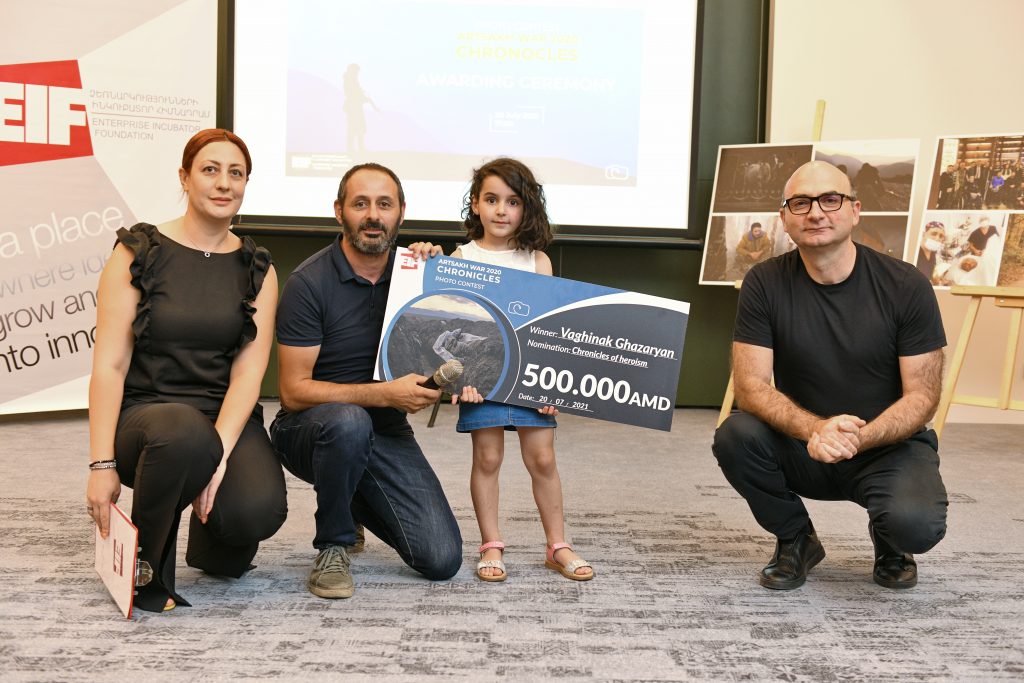 “The moment I saw the soldier, I just froze. At that very moment, I took out the camera and took the photo,” recalled Vaghinak. “Later I learned his name –  Sasun. He is a young lieutenant from Goris, married, with a kid. We, photographers, tried to do our part by preserving these important moments.”

Vahe Melkonyan has taken the prize in the United Back category for his “Strong rear, powerful youth” photo telling a different story: under the management of Arsen, the young owners of a nightclub turned the space into an evacuation station. They provided shelter to the elders, women and children fleeing the hostilities, fed them and helped them get to Armenia. 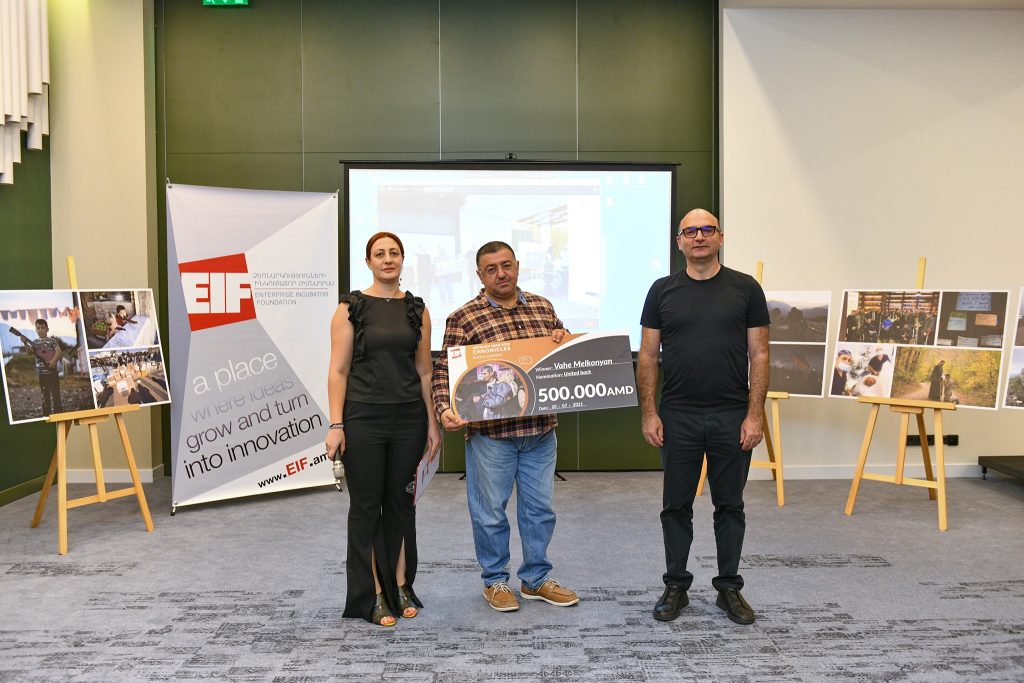 The photographs made during the war portray in one still moment the simple heroism of ordinary people. Each of these photos is a reminder not only of suffering, but of strength as well. Another crucial role the wartime photographs play is the preservation of facts, which prevents distortion and misinterpretation of real events.

During the awards ceremony, an exhibition of participating photographs took place. They were assessed by the jury that featured representatives of various fields from both Armenia and abroad: Rubina Margosyan (EVN Report), Anna Naghdalyan, photojournalists Areg Balayan, Nazik Armenakyan, Erik Grigoryan, Ken Martin and Jackie Abramian from Forbes. 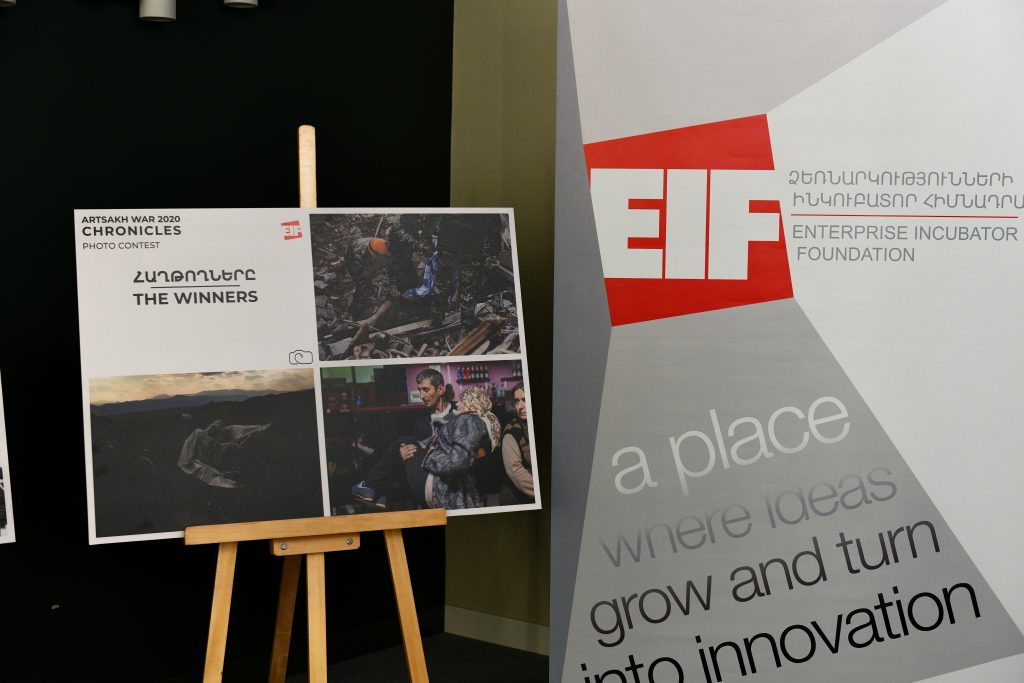 Both the organizers and the winners of the contest delivered remarks, telling about their experience in the war. The award ceremony was very charged emotionally: the wounds of war are still fresh, and while recalling how the photos were made, the winners relieved the tense experience of those uncertain and dangerous days.

Nevertheless, the mission of the contest and the recognition of the collective effort made through the war helped conclude the event with a look toward the future.

All participating photos are available here.